The FIFA World Cup is the absolute pinnacle of International football. Held every four years the World Cup is hosted by one (sometimes two countries) over a 1 month period. The current format for the World Cup is that 32 teams make the finals after close to 3 years of qualifying for some countries. Is a massively viewed event and it was estimated that 715.1 million (a ninth of the entire world population) viewed the 2006 final. The World Cup is probably the most popular betting event in the world with a huge range of bookmakers handing out great offers, we have a top list for The Best Football Betting Sites 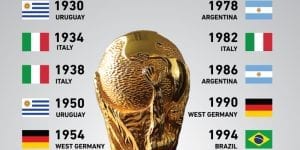 The FIFA World Cup was first held in 1930 although it was absent in 1942 and 1946 due to the second world war. It has been hosted in 17 different countries in total which are Brazil, France, Italy, Germany, Mexico, Uruguay, Switzerland, Sweden, Chile, England, Argentine, Spain, The United States, Japan and South Korea (jointly), South Africa and Russia. The next World Cup is in Qatar whilst Canada, the United States and Mexico will jointly host the 2026 World Cup.

The inaugural World Cup, arranged by FIFA President of the time Jules Rimet, was hosted by Uruguay. The fact it was in South American meant that European teams were were not particularly interested. The level of cost to travel the Atlantic at that time was extremely costly. Nevertheless, Belgium, France, Romania and Yugoslavia agreed to make the trip along with seven nations from South America and two from North America. The tournament was won by the host nation who defeated Argentina 4-2 in front of a crowd of 93.000 in Montevideo.

Travel issues again marred the 1934 World Cup held in France whilst in 1938 only Brazil and Cuba travelled to Italy. Italy won both competitions before World War 2 arrived. That said, both tournaments had 16 teams in it and this was the case all the way until 1982 when the amount of teams increased.

The 1950 World Cup saw British teams enter the World Cup for the first time after issues with FIFA dating back to 1920. Uruguay won the Cup for the second time after defeating hosts Brazil in the final. 1954 was hosted by Switzerland and saw West Germany bag their first Jules Rimet trophy with a 3-2 win at the Wankdorf Stadium in Bern before Brazil became the only Non-European team to win a World Cup in Europe after after winning in Sweden in 1958. This saw the emergence of an extremely young Pele.

Brazil retained the World Cup in Chile in 1962 before England of course won their only World Cup on home soil when they defeated Germany 4-2 thanks to that Geoff Hurst hat-trick. But was it over the line? Brazil won their third World Cup out of four when triumphing in Mexico in 1970. This team has for a long time been considered the greatest to grace the World Cup stage.

1974 and 1978 were both won by the host nation, West Germany and Argentina being victorious respectively. In 1982 Spain hosted their first and only World Cup with Italy lifting their first trophy since 1938 whilst Mexico then hosted another World Cup only 16 years after their first. Whilst the ‘hand of god’ was an iconic moment at this tournament, there is little doubt that Diego Maradona’s general performance was the biggest highlight as Argentina triumphed again.

The 1990’s began with Germany winning Italia 90’, a tournament in which England painfully exited in the semi finals to the eventual winners on penalties. The USA hosted their first World Cup in 1994 as Brazil again triumphed defeating Italy on penalties in what was probably the worst game of football the world has ever witnessed.

1998 saw Brazil again reach the final but this time they were convincingly beaten by hosts France 3-0. This was the first ever time FIFA tried to introduced the Golden Goal, a method by which France advanced earlier in the competition. In 2002 Brazil won their most recent World Cup when it was sent to Asia for the first time in its history. The World Cup was marred by rumours of match-fixing regarding co-hosts South Korea but Ronaldo bagged the Golden boot after Brazil beat Germany 2-0 in the final. This competition also saw the emergence of Ronaldinho on the International scene.

Italy beat France when Germany hosted the finals again in 2006 when Zinedine Zidane famously head-butted Marco Matterazzi in the chest and was sent off in the final. The game was eventually settled on penalties. 2010 saw the coming of age of the Spain team who also won the Euros directly before and after. Germany shattered Brazilian dreams in 2014 when they thumped the hosts 7-1 in the semi final before beating Lionel Messi’s Argentina in the final after extra time.

The most recent edition of the World Cup was last year’s in Russia. France triumphed after beating surprise package Croatia 4-2 in the final. This also saw England reach their first semi final since 1990.

Whilst recent World Cups have been contested by 32 teams the next one in Qatar will have 48 teams competing. There has been a lot of bad press regarding this World Cup and members of FIFA and UEFA have lost their jobs due to alleged wrong-doings regarding awarding Qatar the World Cup. 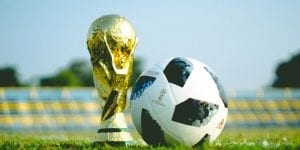 From 1930-1970 the Jules Rimet was the trophy that was awarded. It was originally simply called ‘The World Cup’. The trophy infamously went missing prior to the 1966 World Cup in England but was found by Pickles the dog in a hedge when taken out for a walk by his owner. His owner was awarded £5000.

This trophy was awarded to Brazil to keep in 1970 but the trophy was stolen again in 1983 and was allegedly melted down by thieves. The new trophy is solid gold and was designed by Silvio Gazzaniga. The winners do not keep the trophy for any period of time and are instead awarded a gold plated one straight after the presentation.

From 1958 to 1998 the World Cup was simply shared alternately between the Americas and Europe. They have since been shared out to Asia and Africa. When South Africa hosted the World Cup in 2010 and Brazil in 2014 it was the first time it had been outside of Europe for two consecutive World Cups.