Skip to content
Free Bets → Bookmakers → Should Arsene Wenger be sacked? We say no!

No manager is safe these days! Arsene Wenger’s managerial role at Arsenal has been under threat again (Feb 2017) after his team has failed to take control of recent games, and losing 5-1 to Bayern Munich.

At 67 years old Arsene Wenger is the Premier League’s longest serving manager – 20 years in 2017. He took this title after Sir Alex Ferguson’s 26-year career came to an end after retiring in 2013.

Before we start, let’s just take a look at what it means to be in a job for 20 years in the English Premier League. These are the longest serving managers as of the beginning fo 2017:

As you can see, the tenure times quickly drop off, and the average time in the job is way below the 2-year mark.

So a little bit about Arsene Wenger: 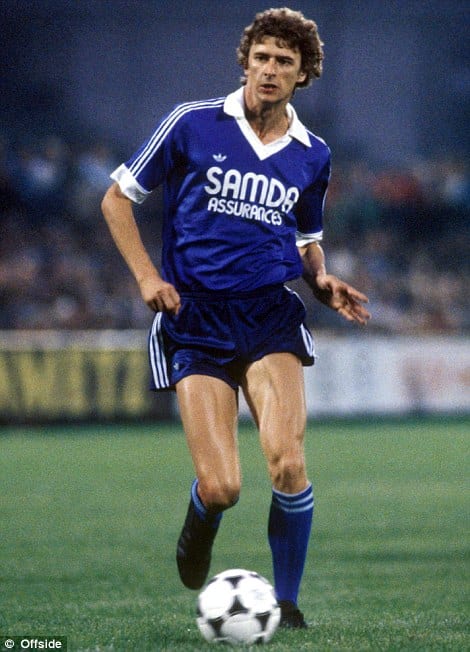 He started his job at Arsenal in 1996 after having spells at 3 other clubs (Nancy-Lorraine, AS Monaco and Nagoya Grampus Eight), where his success at AS Monaco attracted him to the Arsenal. Before this, he’d had a brief playing career.

Wenger has had huge success as manager of Arsenal over the years, gaining the nickname of “The Professor” by fans. His well-dressed towering figure of 6ft 3inches and collected studious nature create a figure that represents what a true football manager should look like. 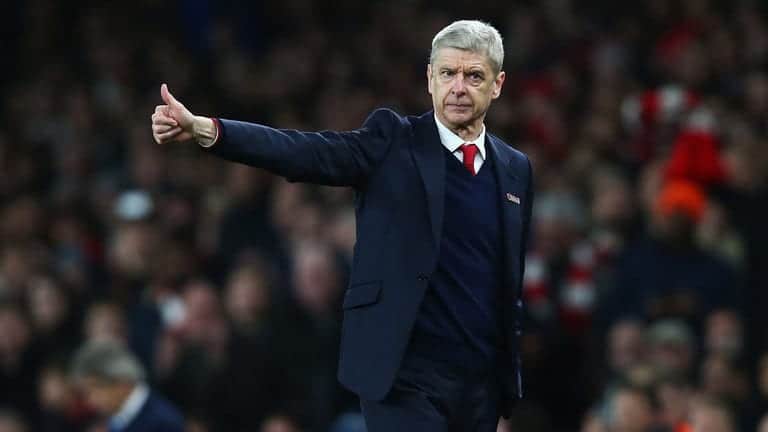 In his time at Arsenal, Wenger has had great success winning many titles:

After Manchester United (13) and Chelsea (4), Arsenal are the 3rd most successful team in the Premier League. Although he’s never won the Champions League with Arsenal, Wenger has qualified for the competition a massive 18 times and played in the final twice in 2000 against Galatasaray (then UEFA Cup), and in 2006, losing 2-1 to Barcelona.

Arsenal have become famous for their youth system under Wenger and the ability to acquire good players for low prices. Until recently it was a common complaint from fans that Wenger never spent big money on players like the other successful teams in the Premier League. However, that changed in 2013 when Mesut Özil was bought for nearly £40 million.

Some of the most successful and famous Arsenal players over the years have been:

These players have shaped Arsene Wenger’s teams and had a huge influence on the club leading to their many successes over the years. 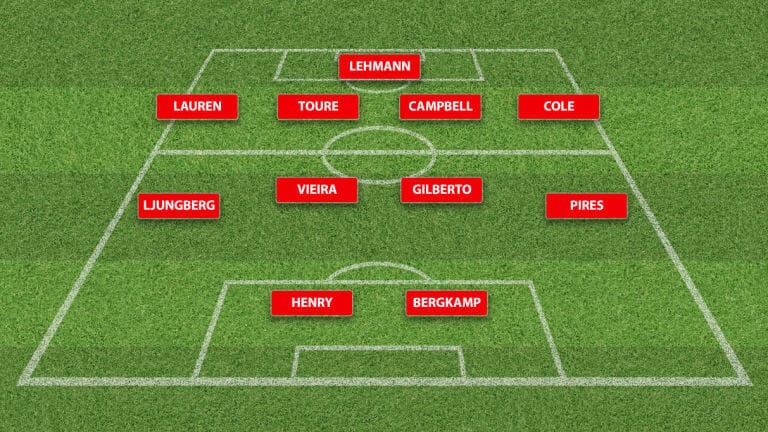 Since the highs of the 2004 season though, fans have been unhappy with the lack of Arsenal’s success. They endured 9 years without a trophy until winning the FA Cup again in 2014. They’ve also not progressed from the Champions League last 16 since 2011.

Does this mean that Arsene Wenger should be sacked, though? We think, NO!

These are our reasons why:

While Arsenal may be 10 points off the top of the table and in 4th position (Feb 2017), they are actually only 2 points off 2nd place. Surely that’s not enough to sack a manager?

(The below table is live, so you’ll see the current positions for today)

Arsene Wenger has won 15 trophies in 20 years with Arsenal – second only to Alex Ferguson with 25 trophies over the same period. Yes, he spent 9 seasons without winning a trophy, but 15 honours is not a fluke. Within those “trophyless” 9 years, Wenger managed to reach the Champions League Final, Semi-final and Quarter-finals which are successes in themselves.

Looking at the table below, the worst Arsene Wenger has achieved in his 20 years at Arsenal is 4th in the Premier League.

Consistency in the Premier League

Success is often defined by winning, however, you can have a freak win and never come close again. What about the teams that consistently do well like Arsenal? Why not measure that for success? 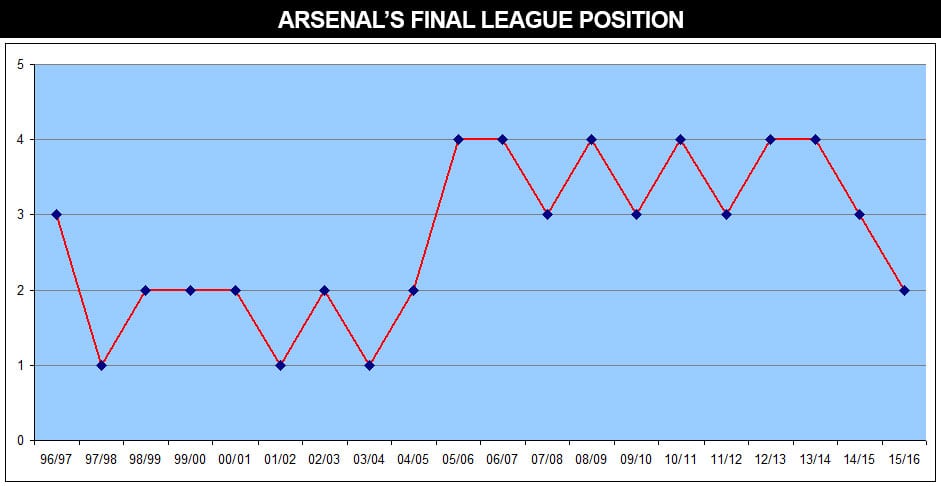 These are the worst positions of Arsenal’s rivals: 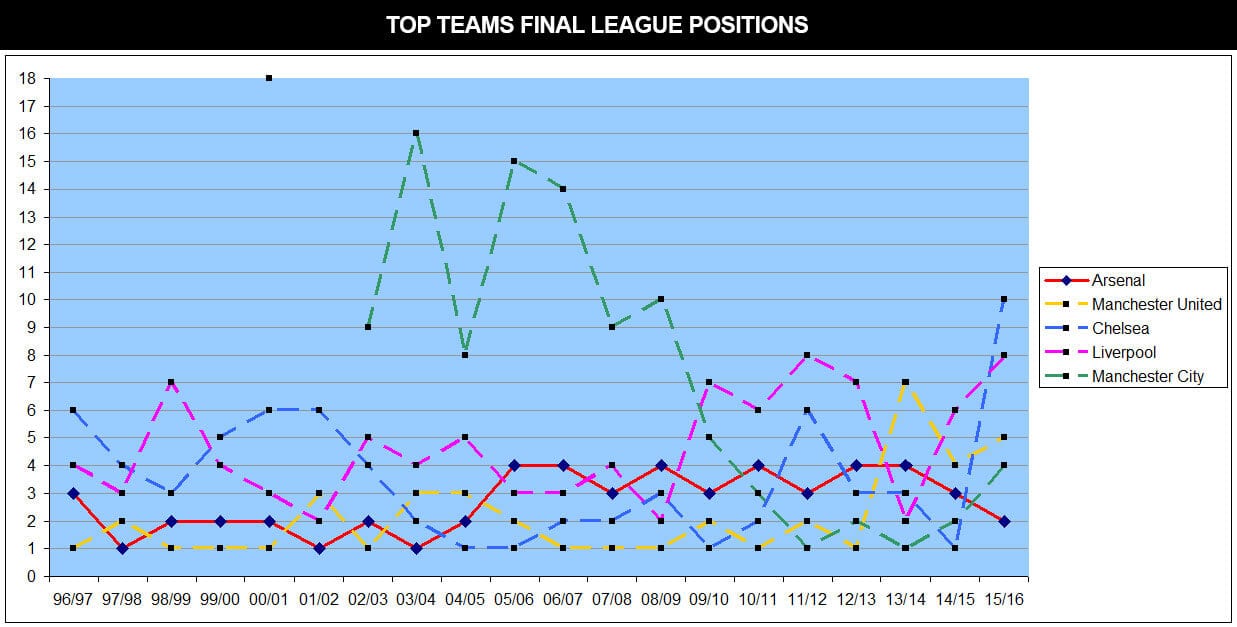 In the 2003-2004 season Arsene Wenger’s team became the Invincibles after 26 wins and 12 draws over the season which saw them crowned Premier League champions.

No other team has done this before and is one of the Premier League most memorable moments. Not even the most successful team, Manchester United have managed to not lose a game during any of their winning seasons.

Once went 49 games unbeaten in the Premier League

Arsenal’s success of their Invincibles season lasted another 7 games into the 2004-2005 season, where they were finally beaten by Manchester United. It was an unbelievable run of 49 unbeaten games, not surpassed by any other team.

During his reign as manager Arsene Wenger has managed an average final league position of 2.7, only bettered by Manchester United.

Chelsea, Liverpool and Manchester City fall way behind this figure.

Qualified for the Champions League every year

Arsenal have qualified for the Champions League every year under Arsene Wenger – the only team to have done so in the Premier League.

In the last year of the UEFA Cup in 2000, Arsenal reached the final. They played Galatasaray in a match that ended 0-0 and were then beaten 4-1 on penalties. This was their first narrow miss of a European title.

While Manchester United, Chelsea and Liverpool have won the Champions League, Arsenal almost had their chance in 2006. They eased through their group stage matches conceding no goals and went all the way to the final where they played Barcelona. However, the match didn’t go as planned after Jens Lehmann was sent off on 18 minutes. It ended 2-1 and Arsenal put on a good display, despite playing with one less man for most of the game.

Arsene Wenger nurtured one of the Premier League’s greatest goalscorers, Thierry Henry, who won the golden boot 4 times (more than any other player), and scored 175 goals overall. 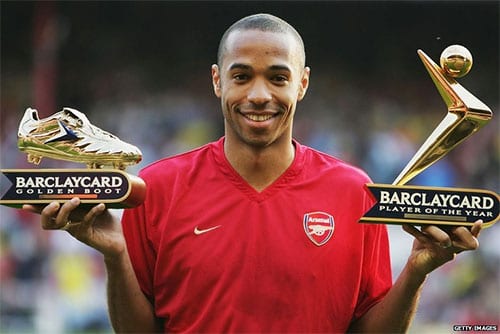 Has a ridiculously high win rate in the Premier League

Only managers who stayed much shorter periods in the League managed greater win percentages than Wenger:In addition to this, Wenger has only lost 17.5% of all is Premier League games!

Wenger is a low spender

Arsene Wenger has achieved all he has even though he’s spent almost half the money that his rivals have! 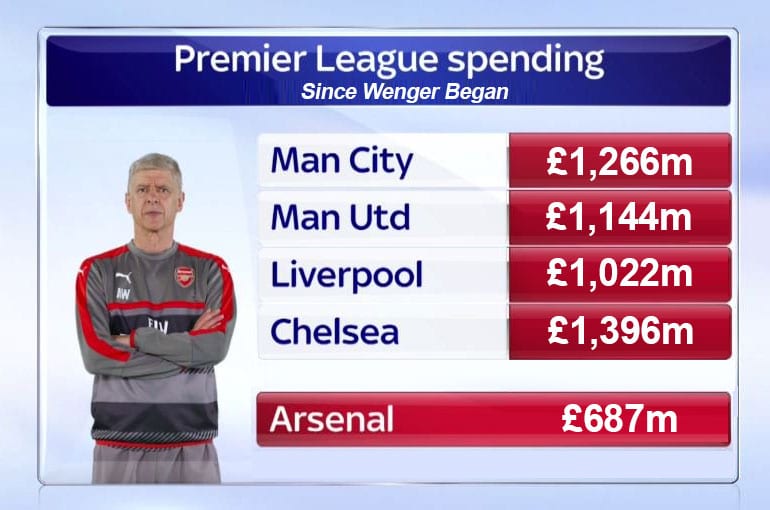 Wenger has always been a fan of the youth system but often criticised for relying too much on it. However, his efforts have paid off and he has shown that you don’t need the most money to be consistently successful in the Premier League.

Should Wenger have left after his first 10 years in charge?

Many people say that Arsene Wenger was a lot more successful in his first 10 years at the club. If you measure success in trophies, you’d be right. The blue text in the 2 tables below shows the first 10 years, versus the second 10 in black.

In the first 10 years above, Wenger achieved his 3 Premier League wins, plus 11 trophies in total. The second 10 years brought a Champions League semi-final and FA Cup wins as the greatest achievements (toal – 4 trophies).

In his first 10 years at the club Wenger averaged a final league position of 2.0. In the second, 3.4.

The above stats don’t look good for Wenger, however when we look at deeper level results, we see that both periods are very similar. Only goals conceded shows a noticeable difference. Yet 7 more trophies were won in the first 10 year period.

Turns out that this fan was right despite the sarcasm:

As a ManUtd fan I think @Arsenal should give Arsene Wenger the 2yrs extension. You can’t sack him he’s doing a great job!

Reasons For Dip in Arsenal Trophies Over the Second 10 Years

So while Wenger has remained pretty consistent with his team’s results, why have the titles and honours gone down?

More competition from other teams

In the 03-04 season, Arsenal won the title by 11 points! While not really on their heels, Chelsea came second that year, and it was the start of a new rivalry in the Premier League. Chelsea won the Premier League in the two following years. Since then, a big London rivalry formed, where the only match that Wenger won against Jose Mourinho was the 2015 FA Community Shield. 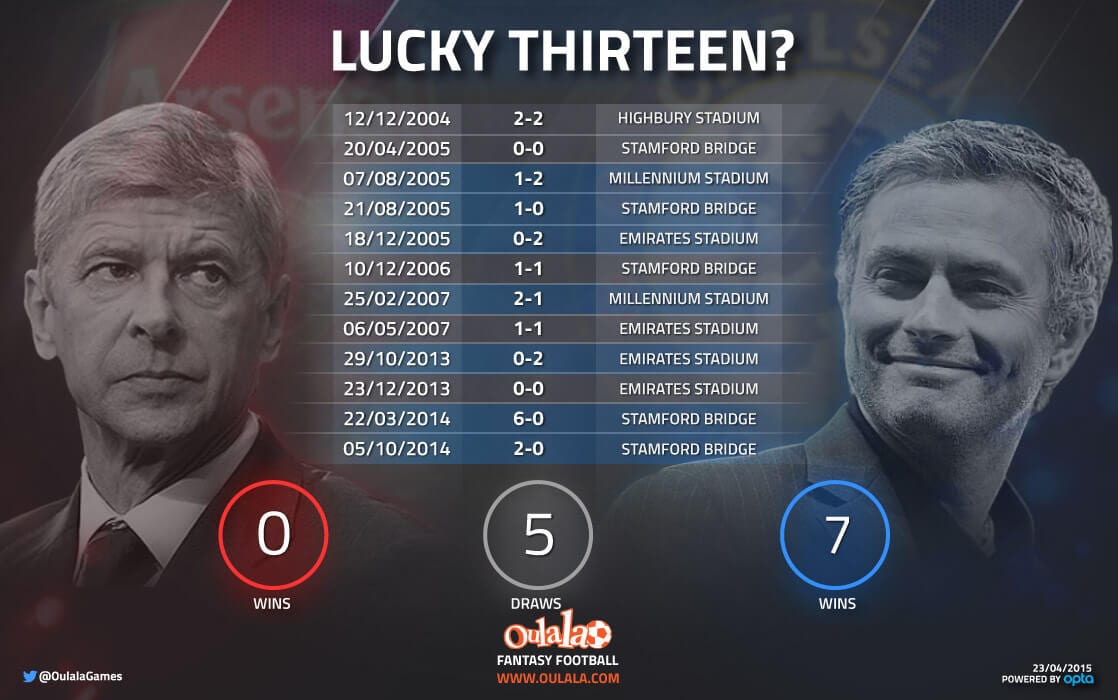 Following Chelsea’s 2 Premier League wins, Manchester United became dominant again. 4 of the next 5 titles were won by United and 1 by Chelsea. After that, saw we Manchester City’s arrival on the scene with their first ever Premier League title in 2014. In 2015 Chelsea won the league again.

Arsenal found it difficult to challenge for the title with Chelsea and Manchester city trebling their competition. Their best chance to win the title again was in 2016, however, an incredible run unexpected by everybody saw Leicester City beat them to it, and Arsenal ended the season in 2nd place.

So one of the reasons that Arsenal have found it hard to win the title again is simply more competition for it. Over the last 7 seasons, no team has consecutively won the title. Before that, there were consistent patterns from Manchester United and Arsenal as they went through periods of dominance.

However, this extra competition has made the Premier League more exciting and shouldn’t threaten Arsene Wenger’s job. As mentioned before, Wenger has remained more consistent than the other teams, plus is still producing the form of his title years even though it hasn’t converted to trophies.

Before Arsene Wenger came to Arsenal were they actually a good team? The data says: not so much.

In the 2 twenty year periods before Wenger, Arsenal’s average final league position was 5.6 and 9.56. They won the league 3 times in that period, so Arsene Wenger won the Premier League 3 times in 10 years whereas it had taken the previous 40 year period to win the same amount of titles.

So the question is, are Arsenal fans expecting too much, and without Wenger will they do so well?

History tells us, no.

We’ve already discussed that before Wenger arrived Arsenal were nowhere near the team they are today.

Now let’s look at what might happen if Wenger got sacked after his long reign as manager. Thankfully we have a perfect example for you. 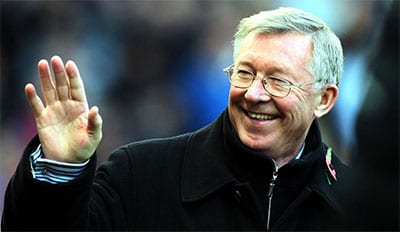 In 2013 Sir Alex Ferguson retired after 26 years in charge of Manchester United and huge success. 13 Premier League titles and only 3 seasons since the Premier League began did Ferguson finish lower than 2nd. Since Ferguson has left though, things haven’t gone quite so well for Manchester United. With league finishes of 7th, 4th and 5th, and 3 managers later, the club has become unstable with much lower and inconsistent league results.

As an Arsenal fan, would you swap a 2.7 average league position for this?

Just before his retirement, Ferguson also had a bad run of results. He went on to come runner up, then won the league again. We all know in football not to jump on a few bad games.

Remember as well, that although after the 03-04 league season Arsenal’s perceived success went down, they still had good success in the Champions League Until 2010.

In light of everything, Arsenal fans should be happy with their manager. History tells us that those who wish for too much often end up getting less.

Who could be the next Arsenal Manager?

With all the talk of sacking (and being near retirement age), it’s only predicable that the bookies have come up with some odds for Arsene Wenger’s successor.

The current favourites for the job are: 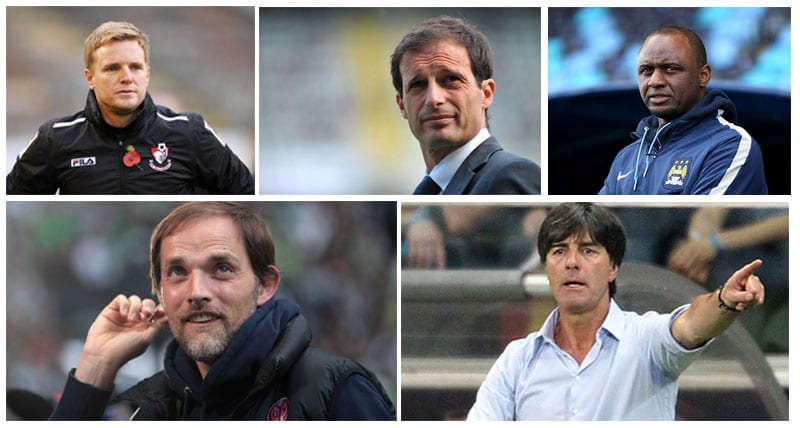 If you’re interested in betting, William Hill currently have these odds on each manager (Feb 2017). 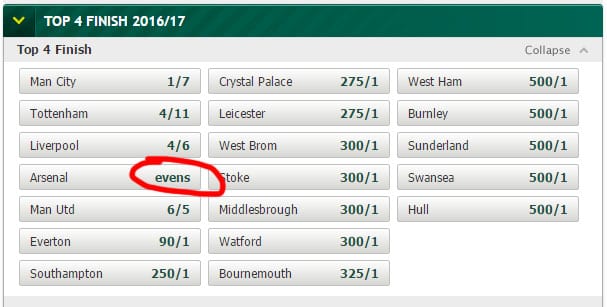 Although it’s easy to react quickly as a fan, it’s best to go on data rather than emotion when making decisions. We all want more success with our teams, but sometimes changes makes things worse rather than better.

We’ve discussed above that even though Arsene Wenger has won less trophies in his last 10 years compared with the first 10, his results and win ratio have remained consistent. Increased competition from teams like Chelsea and Manchester City have made it harder to win the league. Wenger’s principles of nurturing players over spending big have been proven even more right with Leicester’s Premier League win in 2016.

In our view, it would be a big mistake to get rid of the Premier League’s longest-serving manager. Arsenal are in for worrying times when Wenger retires.